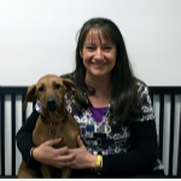 Office Manager: ​Julie grew up traveling the country with her family as a military brat.  She has since settled down in the Johns Creek area with her husband of 20+ years and her two beautiful daughters.  At home she has 2 large Rhodesian Ridgebacks (Indie and Moose), 2 cats (Rupert and Polly), and an ancient Beta Fish named Balto.
Julie joined the LAC team in 2004.  Some of her responsibilities include assisting the doctors with appointments, providing client and patient care, ordering, inventory maintenance, scheduling, and overseeing daily clinical operations.  Outside of work, Julie enjoys traveling, hiking, kayaking, and tending to her Girl Scout Troop of 9 years. 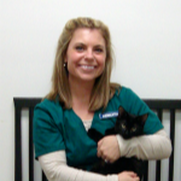 RVT : Meredith graduated from Auburn University with a Bachelors degree in Social Work in 2008.  However, her love for animals brought her into the veterinary field.  She started working at Lafferty Animal Clinic in 2010 and became a Registered Veterinary Technician in 2017.
Her favorite parts of her job are dental procedures, assisting in surgeries, and interacting with clients and their pets.
At home, Meredith and her husband Robby have two dogs - Casey and Bo, 4 cats – Jax, Opie, Raleigh, and Chomper (yep, he likes to bite), and a rabbit named Jasper.   In her free time, she enjoys being outside, running, and spending time with her family. ​Polleth has always had a love for all animals, which is why she enjoys working so much at LAC. Polleth is a student at Georgia State University where she is pursuing a degree as a physician's assistant.  Outside of work she enjoys staying active, spending time with her friends and family, and discovering new music, movies, and podcasts.  She also loves cooking, taking care of plants, and traveling.  Polleth currently has two dogs, BonBon and Capi. She is fluent in both English and Spanish. 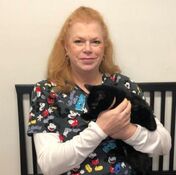 ​Freda is a “jack of all trades”, who has loved animals all her life.  A mother of two, who splits her work time between Lafferty Animal Clinic and driving a special needs school bus for Fulton County. Being a team member at LAC is so rewarding and educational. ​Jacob was born and raised in Denver, Colorado, but moved to Georgia when he was a teenager.  He loves animals and Dad jokes.  Jacob started working at LAC in 2018 working part-time while attending Kennesaw State University, where he studies sport management.  Jacob is in a band named Tax Evasion alongside his friend and co-worker, Louis.  Jacob is a huge fan of sports like soccer and football.  He enjoys nice poems and long walks on the beach.

​Louis is a native Georgian, but is half American and half French. He has worked at LAC since August of 2016. Louis is a biology/pre-med major at Kennesaw State University (Go Owls!!!).  In his free-time he likes to read books, play video games, enjoy nature, and play in a band with his best friend and co-worker, Jacob.  Louis has one dog named Chipie.  He enjoys hard rock music and his favorite band is the Foo Fighters.

​Katherine is a student at Penn Foster College pursuing a degree as a Registered Veterinarian Technician.  Ever since she was young, she has had a love for all animals big and small.  She has two cats, Sherlock and Sammy.  She adopted Sammy from our clinic!  Outside of work she enjoys playing her guitar, watching movies, and cooking. 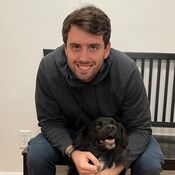 ​Shane was born and raised in Jacksonville, Florida before moving to Alpharetta in the 9th grade. He graduated from The University of Georgia with a B.S. in Environmental Engineering but has now decided to pursue a career in veterinary medicine. He enjoys fishing with his dog (Sophie), live music, and spending time at the lake with friends. 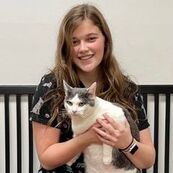 ​Alex is a new team member here at LAC.  She was born and raised right here in Georgia!  Her family has been bringing their pets to Lafferty Animal Clinic since the 1980’s.  She has always loved pets and aspires to one day become a veterinarian. Currently she is a junior at Johns Creek High School.  Outside of work she loves baking, photography, and music. At home Alex has a Labrador Retriever named Bailey, a Bearded Dragon named Spiky, and two cats named Fajita and Stevie Licks.
Andjela - info coming soon
Nick - info coming soon
Anna - info coming soon
Kira - info coming soon